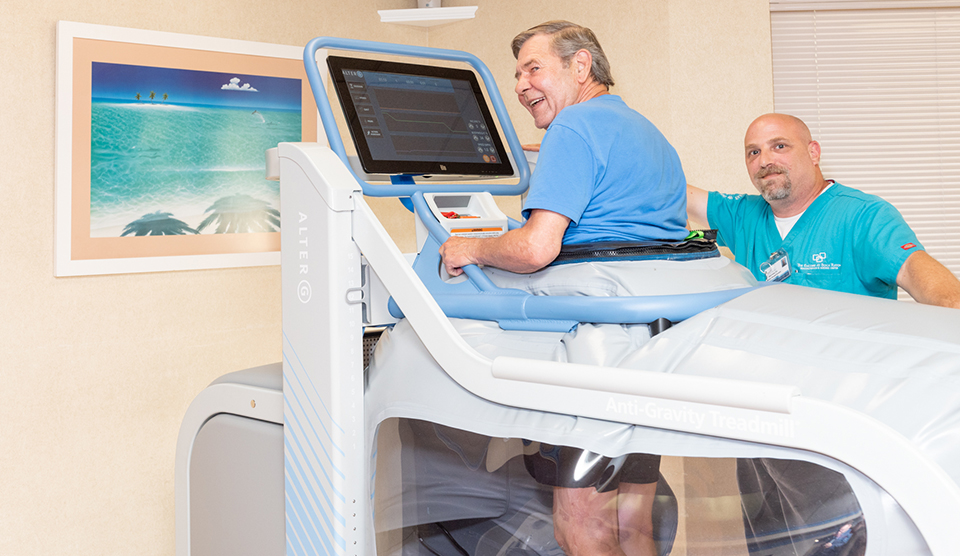 Details of experience:
It was a sunny Thursday afternoon when Mary Smerdon spent a lovely lunch with her husband earlier in the day and was then waiting for him to arrive home from work. Mary had been experiencing flu-like symptoms and assumed she was coming down with the flu which would pass. Mary has a naturally energetic and upbeat disposition, but she could not get herself to stand up and began to panic. Mary began sweating uncontrollably, felt dizzy, was running a 102 fever and was experiencing abnormal weakness.

Mary was rushed over to Delray Medical Center where she discovered that she was suffering from pneumonia, UTI, a blockage in her colon and muscle weakness. Mary had a medically complicated hospital stay. Mary described the pain as being, “hurt down to her hair follicles and toenails.” The hospital recommended extensive rehab before returning home. The Case Manager recommended The Encore at Boca Raton.

Mary was admitted to The Encore on August 26th, 2019. Upon admission, she had a goal of returning to her prior level of function and independence. Mary hoped to be able to do everything from standing up, to driving and shopping. Amongst many others who came in to introduce themselves and give welcomings, Mary was greeted by her Physical Therapist, Robinson, and her Occupational Therapist, Mitch. Robinson and Mitch had similar goals for Mary as she had for herself. Upon admission, Mary required moderate to maximum assistance. Mary was very weak, anxious and nauseous. Mary could not transfer, get up, dress, or use the restroom on her own. Mary’s progress began after three days of therapy. After one week of working with her therapists, Mary began to progress to standing for a few seconds at a time and walking with a walker. Mary stopped vomiting and the dizziness began to subside. Mary became confident in her progress and the therapy continued in a positive direction toward recovery.

During her stay, Mary enjoyed spending time with other residents and attending social activities. Mary’s favorite part of The Encore was the way she felt when she arrived, as she shared with Atara Fink (Director of Concierge Services), “the atmosphere was less like a hospital and more like home. The Encore felt like a hotel, soothing and inviting.” The outdoor greenery was the highlight of Mary’s stay. Mary loved being greeted by the Concierges who brought sunshine and warmth into her room.

Mary’s attitude from the beginning was to not give up and to get stronger every day. Mary was discharged to her home on September 15th, 2019. She thought she would need a walker but was able to disregard the idea completely! After a short three weeks of extensive therapy and working to reach her goals, Mary described herself dancing out of the gym and therapy! Mary stated, “I would not hesitate to tell everyone walking through the doors of The Encore at their lowest point that they are in the best place with the most loving compassion. The staff at The Encore care! They are not there for the pay. They take the time to know who you are and what you need. Miracles happen at The Encore and I am proof!”

We wish Mary all the best and thank her for the positive energy she contributed to our community throughout her stay!