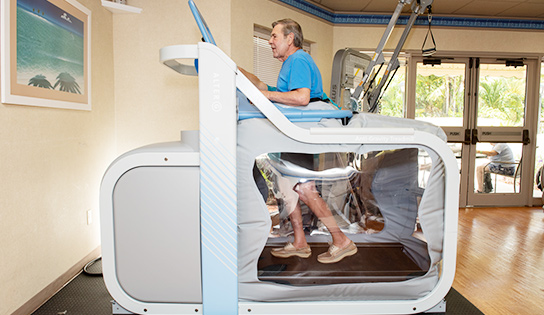 Patient’s Age: 71-years-old
Admission Date: 12/05/19
Admitted From: Select Rehabilitation
Discharge Date: 06/09/20
Discharged To: Home
Length of Stay: 187 Days
Reason for Stay: Was struck by a golf cart, which led to sepsis
How did this patient hear about The Encore: The president of St. Andrews’s friend highly recommended

Details of experience:
It was a beautiful Wednesday morning when Mr. Richard Z. was enjoying his routine as a golf ranger, setting up pins & keeping the grass trimmed. During set up, Richard noticed that one of the club members was having golf cart trouble. After assisting the member, he started to get off of the golf cart when the club member accidentally hit the gas too early and started to drag Richard. Unfortunately, that drag ultimately led to sepsis (potentially caused by body shock).

After a hospital visit, Mr. Z. decided it was time to try something new and made the decision to join The Encore for a final attempt to get better. Upon arrival, Richard was depressed and wasn’t feeling confident that he would recover as he stated, “I did not believe that I was going to get better.” This was completely natural as he was completely dependent on everything other than eating, and he wasn’t even able to move his body in bed, other than his arms.

It took approximately two days for Richard to begin feeling some sort of hope as he shared that his therapists kept telling him “we’re going to get you walking on out of here if you’re willing to work!”He then began to feel motivated and believed in himself that he was going to return to full-strength.

Over the course of his first few weeks at The Encore Richard made tremendous progress as he was exercising effectively bedside, progressing from a hoyer lift to sliding board. He then graduated to stand pivot transfers and standing frames. Richard also began to walk a few steps on the parallel bars. He was extremely excited as he shared “I started to do things I never believed I’d be able to do.”

Just a short amount of time later, he was walking 10 feet max assist with a walker and progressed to 200 feet with supervision and was getting out of bed on his own! He was ready to return home and everyone was very excited!

Richard is currently walking 250 feet modified independent with a walker and 150 feet standby assist with a cane! He is also independent of toileting, bed mobility, & dressing!

Richard is extremely grateful for his incredible recovery at The Encore as he stated “I can walk, bathe myself, and do so much that I could not when I came in. It feels FANTASTIC! Robinson & Mitch got me walking. The reason I’d recommend this place to anyone is because I never thought I’d walk again.”

Richard also loved some of the other parts about The Encore, such as the incredible customer service they offer as he stated “my favorite part of my stay is the interactions with the staff. They’re just so friendly, always offer to help, and are so accommodating. They’re also pleasant to be around, they’re really wonderful. The kitchen staff even find items for me that are not on the menu! I can’t say enough about the people who work here!”

We at The Encore are excited to watch Richard continue to progress!